How much did our ancestors drink – and are we drinking more? 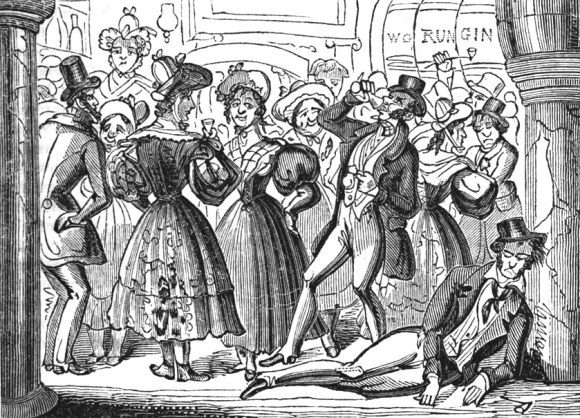 Autumn is awash with alcohol, and not just because of the new vintage. Oktoberfest plays a part, too, the 16-day festival in Munich that we associate with massive beer mugs and plenty of debauchery. Its success has prompted copycat events around the world, from London to Ontario, Glasgow to Cincinnati. Such indulgence adds further fuel to the fear that we’re getting drunker than ever. But are we?

Recent statistics seem to bear this out. There are many worrying examples – like the million drink-related UK hospital admissions in 2013 alone. Similar figures can be found the world over. But if you look at European drinking habits in a historic perspective, other evidence suggests that our levels of intake are not unprecedented.

By Beat Kümin,University of Warwick

Let’s face it: while the roots of the Oktoberfest stretch to the early 19th century, Europeans have a much longer tradition of periodic alcohol excess: carnivals, church dedication feasts and numerous rites of passage have existed from as early as our records begin.

More generally still, drinking has always been an integral feature of European culture, be it as an indispensable part of people’s diets or a facilitator of countless forms of social exchange.

Let’s start with the present. 6.3m visitors downed 6.5m litres of beer at this year’s Oktoberfest, a little over one litre per person on average. Widening the perspective from the local to the global, the Kirin Beer University Report, based on returns from brewers’ associations and the latest industry statistics, sees China as the largest beer-consuming country in the world for the tenth consecutive year, with a remarkable 23.6% of the world market.

But the picture is different when measuring in a unit that adjusts for the varying strengths of beer, wine and spirits – in terms of pure ethyl alcohol. According to the World Health Organization’s Global Status Report on Alcohol 2004, the biggest drinkers are actually the Czechs, with 9.43 litres of ethyl alcohol per head. This is equivalent to roughly 232 pints or 132 litres of lager per year (or 0.3 l. per day). Germany ranks 4th and the UK 9th, with 5.97 litres. The corresponding list for wine is headed by Luxembourg with 9.43 litres, followed by France, Portugal and Italy; the spirits chart by the Republic of Moldova (10.94 litres), with Reunion and Russia in 2nd and 3rd place. Over the years, trends can go up as well as down.

Meaningful longer-term comparisons are, of course, very challenging. Producing accurate figures for societies of the past is riddled with problems. As with all statistics, there are issues of interpretation and contextualisation, but this is magnified for periods with patchy sources and unknown variables (such as beverage strengths). But it is possible to extrapolate from information surviving in disparate records such as household accounts, diaries, travel reports, customs books, inventories and similar genres.

A House of Commons Health Committee Memorandum sheds valuable light on the case study of England, illuminating fluctuating drinking habits since Tudor times. Between 1550-1650, the earliest period covered, consumption increased due to the commercialisation of the brewing industry and rising wine imports facilitated by Dutch traders.

Over the next century, the evidence becomes more ambivalent given that the “Gin craze” in the mid-1700s captured so memorably by Hogarth coincided with a rise in non-alcoholic alternatives (like coffee, tea and chocolate).

The years of the Industrial Revolution between 1750-1850 then brought a marked decrease in alcohol consumption, followed by a renewed upturn towards the end of the 19th century and another decline continuing into the second half of the 20th.

It’s from the 1950s that England witnessed its latest upsurge, most spectacularly in per-capita wine consumption (which rose from four pints in the 1950s to 25.5 pints today). In their explanatory framework for this roller-coaster ride, the authors of the survey place less emphasis on issues of deprivation and escape drinking than on socio-political and cultural factors such as varying taxation burdens, shifting codes of behaviour, the relatively recent phenomenon of excess drinking by women and proportional increases in wealth for key sections of the population.

Venturing even further back in time (and yet more speculative ground), it seems probable that the late Middle Ages (circa 1350 to 1500) formed a previous peak of alcohol (and meat) consumption. These centuries represented a “golden age” for lower social groups, which benefited from relatively high wages and low rents in the wake of the Black Death. The country was flooded with amateur brewers and “alewives” engaged in small-scale household production. It’s unlikely to be a coincidence that rural parish communities, in a period nostalgically referred to as “Merry England”, derived most of their supplementary income from the sale of church ales.

Drunk on the Continent

If we widen the perspective to the Continent, further peaks and troughs of historical imbibing reveal themselves. Typical estimates of per-capita intakes for 16th-century Central Europe cluster around 1 to 1.5 litres per day (well above even the Czech figure for 2013). This decreased – as in the case of England – to around 1 litre by the late 18th century, albeit with huge social, regional and situational variations.

A recent analysis of the contested relationship between alcohol and violence came to equally intriguing conclusions: while consumption for present-day Italy reaches some 0.2 litre of wine per person per day, the figure for documented Renaissance individuals could easily exceed 1 litre. In “Puritan” England, where we find the loudest protests against drinking excess, the levels of intake were actually much lower.

Turning to more indirect evidence, in German-speaking Europe during the 18th century (a relatively sober point) some public houses clocked up sales many present-day successors can only dream about: In 1787-88, the keeper of the Sun Inn at Herzogenbuchsee, a Swiss village on an important highway with three fairs, accounted for a massive 38,700 litres of wine retailed on the premises (on average 106 litres a day). Yet far from stable and proportionate, local drinking landscapes could be very dynamic. As this graph shows, the three inns in the nearby village of Münsingen saw very diverging trends in their turnovers over a hundred-year period:

By the second quarter of 2014, by comparison, UK pubs recorded 3,633,000 barrels (circa 595,000,000 litres) of annual on-trade beer sales. Dividing this by the roughly 48,000 outlets operating in 2013 yields a daily figure of just under 34 litres and, once again, by no means historically unprecedented levels.

All these calculations only re-emphasise the problems of approaching the issue of drink through statistics alone, especially in a wider historical context. Of course we have grounds for concern, but let’s keep things in perspective.

Looking back over the centuries, we find no linear increase or decrease of alcohol consumption. Every so often societies tend to slip into moral panics about drinking excess, at times on rather questionable grounds. And throughout European history, alcohol has been viewed as a socio-cultural resource as well as a “problem”. Worth remembering perhaps the next time we see a tabloid headline about our ever-worsening drink problem.

Podcast Episodes about the History of Alcohol

Reading time: 4 minutes
Why do humans like to get drunk? Scientists have written off our affinity for intoxication as an evolutionary mistake, a trick that humans have developed for gaming our biological reward system into releasing little shots of pleasure for no good reason. This, however, is not a satisfying explanation. It should puzzle us more than it does that we have devoted so much ingenuity and concentrated effort to getting drunk.

Reading time: 5 minutes
The idea of hanging up decorations in the middle of winter is older than Christmas itself. Decorations are mentioned in ancient descriptions of the Roman feast of Saturnalia, which is thought to have originated in the 5th century BC.

Podcast episode from History Hit. Pete Brown used to advertise lager for a living, until he realised that writing books about beer was even more fun, and entailed drinking even more beer. He appears regularly on television as a beer expert, writes on beer for a variety of publications and is the author of Man […]