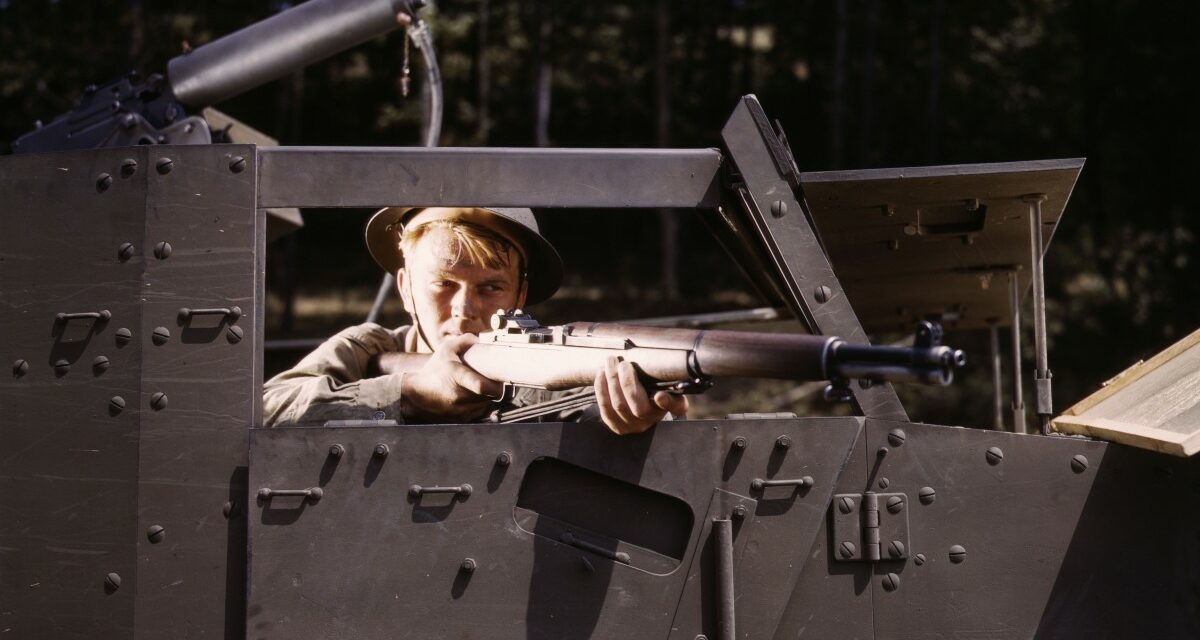 The world was first introduced to the machine gun and its revolutionary auto-loading technology in the late 1800s. While pistols were easy to convert and adapt, with their small form factors, rifles proved to be far more challenging.  However, the First World War showed the value and importance of heavy firepower and pushed the need for a solid semi-automatic rifle. That’s where the M1 Garand comes in – the “greatest battle implement ever devised.”

The story of this famous American rifle naturally begins with its designer John Garand. Born in Quebec in 1888, the same year the machine gun was invented, this former farmer would eventually be seen as a true American Patriot.

Following the death of their mother, the very large Garand family moved to Connecticut, where Garand and his siblings began working. He worked various jobs throughout his young life, the most notable being his positions at a textile mill, shooting gallery, and different tool-making firms.

Garand garnered several skills throughout his working years, including forging, welding, and steam engineering. He had an innovative mind, and by the time he was 18, Garand had developed and patented two inventions – a telescopic screw jack and an automatic bobbin winding machine.

During his time working at shooting galleries, Garand developed a love for guns. Combined with his passion for inventing, it quickly developed into a love for weapons design.

After the United States entered the First World War, Garand submitted a design for a light machine gun to the US Navy. While his design was initially rejected, he was offered a job as a weapons designer.

He was later transferred to the Springfield Armory in Massachusetts, where he stayed until his retirement in 1953. It was here that he developed the famous M1 rifle.

He received no royalties from the M1 design, as he transferred all rights to the United States government. As a result, he never profited from the several million M1 rifles produced.

However, Garand was recognized for his skill and received several prestigious awards. Amongst them was the Meritorious Civilian Service Award. In 1973, a year before his passing, he was inducted into the U.S. Army Ordnance Corps Hall of Fame for his M1 Garand Rifle.

Development of the M1 Garand

During his time at the Springfield Armory, Garand, and others, were tasked with designing a new weapon that would replace the old M1903 Springfield Rifle. This rifle was old, heavy, and its fire rate was limited by its bolt action. The new gun needed to be semi-automatic, strong, but light and easy to manufacture. Most importantly, however, it had to use the new Springfield .30-06 service cartridge.

Garand found that the most effective design was a gas-operated system. These systems use the high-pressure gas from the firing of a cartridge to operate mechanisms within the gun to expel spent cases and insert a new cartridge into the chamber.

Garand designed a long-stroke piston system that included a small port at the front of the muzzle. This port allowed the gasses to move into a small cylinder below the barrel, causing the gas to drive back a piston. The piston was attached to an operating rod, which in turn was attached to the bolt. As the rod was pushed back so too did the bolt, forcing a new cartridge into the chamber.

The M1 also used a reversible en-bloc clip, which held eight rounds and was ejected along with the last cartridge casing. A follower mechanism held the bolt open for a new clip. The automatic ejecting of the clip gave the M1 its famous pinging sound.

Garand designed several guns before landing on the M1. His first was the T1E1, but its bolt was too weak. His second design was initially called the T1E2, but, with its redesigned bolt, made it through the various rounds of testing. It was renamed the US Semiautomatic Rifle, M1. Several prototype M1s were produced, labelled ‘Model Shop’ M1s, for further testing.

After a few modifications, the M1 was officially standardized in early 1936.

World War Two, the Korean War and Beyond

Production was extremely slow initially very slow, with the US army only receiving the new M1 in late 1937. However, by the time the US entered the war in 1941, around 600 M1s were produced per day. As the war raged on, production was further ramped up. At its peak, Springfield Armory produced approximately 4000 rifles a day. By the end of the war, over 4 million M1 Garand’s were produced.

Garand and the Springfield Armory investigated changing the materials of the en bloc clip. The famous pining sound made by an expelled clip allegedly alerted enemy soldiers of an empty M1 clip, causing them to rush the vulnerable American soldier. However, studies conducted during WW2 determined that this was not actually the case. You would have to be very close to the M1 in order to hear the ping sound over the roar of battle. The soldier was also part of a squad, who would all have loaded rifles and be happy to shoot an enemy soldier who rushed towards the sound of the ping!

The M1 gave the United States armed forces an edge during the Second World War and the Korean War. It remained in service throughout the 50s, until the Soviet’s superior AK-47 arrived on the battlefield. The Garand was officially replaced by the updated M14 in 1957. However, it wasn’t the end of this World War 2 icon.

The M1 continued to make an impact throughout the Cold War. Several hundred thousand were sent to South Vietnam during the Vietnam War. It was also one of the main weapons used during the Bay of Pigs Invasion.

The M1 Garand continued to arm soldiers well into the 21st century, becoming a common weapon in several recent civil wars. No wonder it was called the “greatest battle implement ever devised,” by Lieutenant General George S. Patton Jr.

The history of the M1 Garand tells a story of a gun that become an American icon. While it was the only successful rifle developed by John Garand, it made him one of the greatest weapons designers of all time. Its gas-operated design made it the first standard-issue automatic rifle for the US. and allowed it to become, and remain, one of the most influential weapons of history.

Less than two months after the devastating surprise attack at Pearl Harbour, the US Navy was on the offensive. They carried out several raids on Japanese territory in the Pacific. The Raid on the Marshall and Gilbert IslandsFebruary 1, 1942 The first offensive operation by Task Forces of the United States Pacific Fleet in the […]