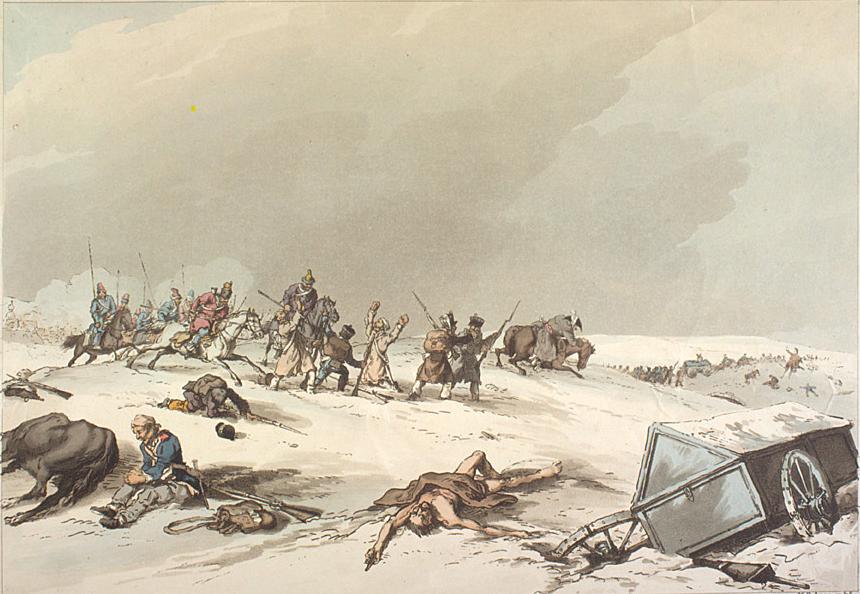 THE BEGINNING OF THE END: NAPOLEON’S RETREAT FROM RUSSIA

On 24 June 1812, Emperor Napoleon Bonaparte led the French Grand Army across the Neman River, invading Russia. By this point, the French Emperor had won many military victories, giving him control over most of Europe. However, his invasion of Russia would prove to be a devastating point in the Napoleonic wars and a major blow to his political and military power across Europe.

Napoleon had always seen Russia as a natural ally due to the lack of territorial conflicts with France. However, this stance quickly changed when the Russian Czar Alexander I moved against Napoleon.

In 1810, Alexander I stopped complying with Napoleon’s trade embargo against Britain, known as the Continental System. This was due to the negative effects the embargo had on Russian trade. Over and above this, Alexander I imposed heavy taxes on French luxury items and denied Napoleon’s request to marry one of his sisters.

His fears came true in 1812 when Napoleon moved a massive army to the borders of Russia in Poland. The size of the army was between 500,000 and 700,000 men from all over Europe. It’s been described as the most diverse European force since the Crusades.

Understanding the dangers of Russian winter, Napoleon knew his invasion needed to be quick and decisive. However, he wasn’t expecting the refusal of Russian troops to engage his army near the border, or the realities of the harsh Russian terrain.

Napoleon and his troops crossed the Neman River from Poland on 24 June 1812. Instead of engaging, however, Russia pulled its 200,000 men back. By 27th June, the French army had easily captured the city of Vilna. A storm swept over the city the same night, with freezing rain, hail, and sleet killing several troops and horses. Many soldiers had also already begun to desert the French army in search of food. Despite this, Napoleon marched on.

The Russian forces continued to retreat, but they left devastation in their wake. As they abandoned the city of Vitebsk, they set fire to many military stores and a bridge. The Russian army continued burning cities every time they retreated. The scorched earth tactics were also carried out by peasants, who burned their crops to deny them to the French.

The lives of the French troops only worsened as they became overwhelmed by typhus and dysentery. While many lives were lost during minor battles, most died from these diseases and lack of supplies.

The Battle of Borodino

Napoleon’s forces reached the small village of Borodino near Moscow on 7 September. They were met by the Imperial Russian Army and the bloodiest battle of the invasion ensued. It’s said to have involved more than 200,000 troops and resulted in the death of over 70,000 men.

Both armies fought with overwhelming firepower for the age, with thousands of cannon balls and hundreds of thousands of musket balls expended. The battle ended the next day as the Russian army retreated once more, leaving the road to Moscow open. While this was another victory for Napoleon, the battle exhausted his forces. This battle was also the last offensive action fought by Napoleon in Russia, becoming a pivotal point in the campaign.

The Beginning of the End

After a few days of rest following the devastation of the Battle of Borodino, the French army marched toward Moscow. They reached the city on 14 September, but instead of meeting resistance from Russian troops, they were faced with a burning city.

The citizens of Moscow had been ordered to evacuate by the Russian troops. All they left behind was a little food, plenty of alcohol, and Moscow in flames. While the French troops pillaged the empty city, Napoleon waited for Alexander I to surrender. Napoleon and his forces waited in Moscow for over a month, but no offer for peace came. By 19 October, the cold had begun to set in, and Napoleon was forced to move from Moscow.

Things continued to spiral for the French Army as they retreated through the already devastated countryside. By this point, Napoleon’s forces were reduced to a mere 100,000 men. Many more died on this journey, either from disease, small battles, or being exposed to the harsh Russian winter.

Throughout November the humiliating realities of Napoleon’s losses were exposed to the world. On 5th December, amid rumours of a potential coup, Napoleon left his devastated army. Just over a week later, what was left of Napoleon’s grand army straggled back over the Neman River.

The Fall of Napoleon

By the end of 1812, Austria, Prussia, and Sweden rejoined the fight to crush Napoleon. By the following year, most of Europe was against him.

Napoleon still managed to raise a large army to fight his new enemies. However, his devastating losses in Russia meant he was short on experienced troops and cavalry. Despite this, the War of the Sixth coalition ensued.

France managed to secure a handful of victories throughout the war but was ultimately defeated. The Battle of Leipzig in October 1813 ended in Napoleon’s loss, further weakening his withering control.

Paris was ultimately captured in March 1814 and Napoleon was forced into exile on the island of Elba. He attempted to regain power once more a year later with the Battle of Waterloo but was ultimately defeated.

Napoleon Bonaparte managed to gain control of most of Europe throughout the Napoleonic wars. But his six-month-long invasion of Russia sparked the beginning of his downfall. While his invasion was well planned, the harshness of Russia’s seasons and terrain, and clever military tactics by the Russian army would prove devastating. Napoleon’s failed invasion would encourage mutiny amongst his allies, ultimately resulting in his downfall and exile.

One of the Great War’s abiding myths is that the German High Sea Fleet never emerged again after the Battle of Jutland to face the Grand Fleet until the ignominious internment of its major units in November 1918. In reality, the Germans mounted another operation before the summer of 1916 had ended. As soon as […]