The Chatterley Trial 60 years on: a court case that secured free expression in 1960s Britain 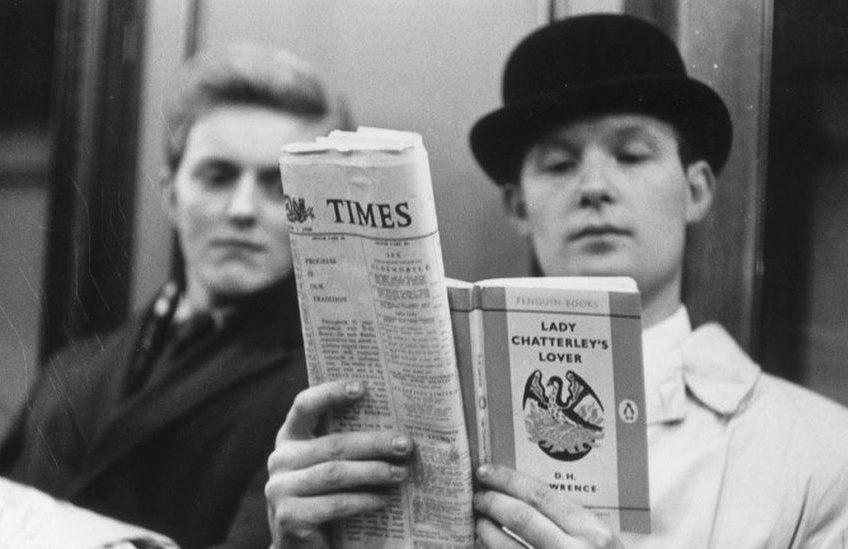 THE CHATTERLEY TRIAL 60 YEARS ON: A COURT CASE THAT SECURED FREE EXPRESSION IN 1960S BRITAIN

The paperback copy of Lady Chatterley’s Lover pictured above is of great cultural significance. Leafing through the pages one discovers hidden gems: pencil markings, underlinings, marginal annotations. Accompanying the book are sheets of headed stationery from the Old Bailey, containing handwritten notes relating to the novel along with a clumsily hand-stitched fabric bag – apparently made not to protect the book but rather the person carrying it by obscuring its title.

By Lois Bibbings,University of Bristol

It’s the “judge’s copy” of the book, used by Mr Justice Lawrence Byrne who presided over the 1960 Lady Chatterley trial in which DH Lawrence’s famous novel was at the centre of a test of Britain’s new censorship law.

The University of Bristol’s acquisition of the so-called “judge’s copy” in 2019 was an important moment and, having assisted in making the case for its new home to be in the university’s special collections, examining it for the first time was thrilling. Now, on the 60th anniversary of the trial it is timely to consider this intriguing volume. But first a reminder of the case with which it was connected.

In August 1960, by pre-arrangement, the police were handed copies of the unexpurgated Lady Chatterley by its publisher. Following this, Penguin Books Limited was charged with publishing an obscene article under the Obscene Publications Act 1959.

The 1959 act aimed both to strengthen the law concerning pornography and to protect literature. It created the publishing offence (the handing over constituted publication) and provided that material was “obscene” if its effect, taken as a whole, was such as to tend to deprave and corrupt persons who were likely to read, see or hear it.

But a public good defence meant a conviction would not result if it were proved that publication was justified “in the interests of science, literature, art or learning, or of other objects of general concern”. The Lady Chatterley trial was a test of the act; in particular, would the defence protect creative works?

In the courtroom, while the defence did not accept the book was obscene, their focus was on its literary merit. A line up of 35 witnesses (women and men) were called on behalf of publisher Penguin to speak in favour of the book, including authors, academics, clergy, a 21-year-old English graduate and a headmaster. The prosecution played a minor role, calling only one witness and sometimes putting no questions to those who appeared for the defence. In the end, after three hours of deliberation, the jury of three women and nine men returned a unanimous verdict. Penguin was acquitted.

Which brings us back to Lady Chatterley and, in particular, the book in the fabric bag. Copies of the unexpurgated novel were circulating before 1960, meaning some of those involved in the case had long been familiar with it – the first defence witness had read it in about 1940. The police had acquired a marked-up proof copy of the Penguin book before the publisher’s handover.

The lawyers had taken great pains to study the 1960 text in preparing for the trial. Defence files show that Penguin’s solicitors undertook an analysis not entirely dissimilar to that on show in the “judge’s copy” with its accompanying notes. As prosecutor Mervyn Griffith-Jones demonstrated in his opening to the jury, where he observed that the words “fuck” or “fucking” occurred at least 30 times within the novel’s pages, so too had the Crown.

The jury were given copies in court, just before the trial began. At the end of the first day, the judge adjourned the case, directing them to read the book but forbidding them from taking it home. After a gap of several days the proceedings resumed and the trial continued for a further five days.

Reports tell how copies of the novel were handed round the court during the trial, to the jury, witnesses and to the judge, with the players occasionally leafing through the pages in search of a particular passage. The judge, however, was given a copy of the book at the same time as the jury first received it, on day one of the trial, before proceedings got underway.

It seems that at some point Byrne shared the novel with his wife, as we are told that most of the markings in the book and all of the separate notes are in Lady Dorothy Byrne’s hand, with a few annotations apparently made by her husband. Accounts suggest she worked on the text before the trial (or perhaps during the jury’s reading days), with her husband adding notes during proceedings as she sat next to him. Lady Byrne is also credited with making the bag.

This all suggests that the couple worked together, with Lady Byrne taking the leading role. Moreover, they did so despite Griffith-Jones’s question to the jury on day one of the trial: “Is it a book that you would even wish your wife or your servants to read?”

How then did the “judge’s copy” journey to Bristol? The Byrne family auctioned it in 1993. It came up for sale again in 2018, selling to a private individual in the US. In an attempt to keep it in the UK, the book was placed under temporary export deferral and expressions of interest were sought. At Bristol we put together a case to acquire the book and fundraising efforts began, with contributions coming from organisations and individuals.

As a result, the “judge’s copy”, notes and bag now reside alongside the Penguin Archive and trial papers of Michael Rubinstein, Penguin’s solicitor. Given its history, however, I wonder if we might begin to reconsider how we refer to this Lady Chatterley. Because of her work, the judge’s wife seems to deserve credit; it is not only the “judge’s copy” it is also very much “Lady Byrne’s copy”.

HOW ONE WOMAN PULLED OFF THE FIRST CONSUMER BOYCOTT – AND HELPED INSPIRE THE BRITISH TO ABOLISH SLAVERY While many companies have trumpeted their support for the Black Lives Matter movement, […]

History Guild General History Quiz 81See how your history knowledge stacks up! Want to know more about any of the questions? Once you’ve finished the quiz click here to learn […]